Bangkok is a city blending the 21st century with Thai culture from centuries past  – a contrasting cacophony of architecture, traditions and bustle. 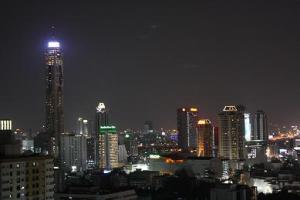 The modern Baiyoke skyscraper with its illuminated rounded pinnacle, for example, contrasts sharply to the spired chedis and mondops within the temple complexes of Wat Pho and Wat Arun.  I walk streets where golden Buddhas sit in storefront windows – seemingly for blocks – next to stands selling produce and clothing.

Along the river. Photo by Richard Varr

I jump aboard the Chao Phraya Express, the river’s signature taxi boats, and see traditional long-tail boats with their cargos of Thai spices and eggplants next to chugging barges overflowing with rice.  And I cross paths with Buddhist monks draped in their traditional orange robes while browsing through modern shops. 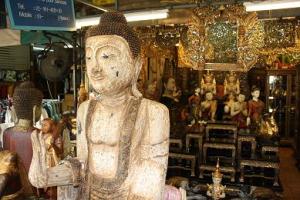 Women sift through the jumble of elegantly-banded, high-heeled shoes and yellow-strapped sandals atop boxes stacked in rows.  I visit the next stall to come face to face with an assortment of meditating and reclining Buddhas amidst other figurines of praying gold-trimmed deities and carved wooden elephants.  And during a quick walk outside the shopper-packed maze of passageways, I catch a whiff of crackling sweet corn as it roasts over a fire.

I am in one remote corner of suburban Bangkok’s giant Chatuchak Market – a sprawling shopper’s dream with more than 6,000 stalls crammed into an area the size of five football fields.  It’s where vendors sell everything from shimmering crystal and fine jewelry to engraved hand-carved bowls and red-flowered pink sofas.  Vendors display fresh seafood and hand-cut flowers, and mannequins sport thin-strapped dresses highlighting fashions in vogue.

And it’s a buyer’s market.  “Because some shops set the prices very high, you can bargain maybe up to 50 percent with the shops that have higher prices, or 20 percent off shops giving you a very low price,” my guide points out.  “It depends on how they feel.  Normally, the first sale in Thailand brings them luck for the rest of the day.  When you’re bargaining, small or big, they’ll give you the good price for the first sale in the morning.” 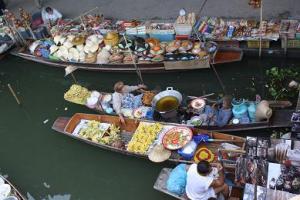 The next day, I jump in an elongated wooden canal boat to reach the inner twists of khlongs (canals) that make up Thailand’s legendary Damnoen Saduak Floating Market, about an hour outside of Bangkok.   It’s where vendors peddle everything from colorful straw hats and oil paintings, to fresh shrimp and vegetables on their boats – wok-frying them on the spot with chilies, tamarind and lemon grass spices.

These are just a few of the marketplaces in greater Bangkok, many centered in and around historic sites, with their exotic mix of sweet, sour and even pungent smells from mounds of dried fish, beef, crab and bananas.

Another important tradition is the amulet market.  I pass through one such market, a stretch of shops along a busy Bangkok street adjacent to the Grand Palace, where I find copper, iron and silver charms emblazoned with images of Buddhas and past Thai kings.  “It brings good luck,” says a vendor.

Bangkok Buddhas:  Anatomy of a Wat

With their spired chedis and gold-trimmed temples, Wat Phra Kaeo and Wat Pho are two of the most visited tourist sights in Bangkok – the former home to the doll-sized Emerald Buddha, and the latter housing the 150-foot long Reclining Buddha.

Alongside a courtyard wall outside Wat Pho’s main ceramic-studded and ornate bot or temple, I see a row of golden Buddhas shimmering in the hot afternoon sun, further illuminating Thailand’s devotion to this most revered god.

“This is an amazing area where people come to visit – not only foreigners, but Thai people as well.  The Emerald Buddha is a very holy Buddha,” says my tour guide.  “The Golden Pagoda is said to hold the ashes of the Lord Buddha.  We don’t call them ashes, but instead relics – relics from the collarbone of the Lord Buddha after cremation.”

The unique Thai architecture of the wat – pointed spires and the layered temple rooftops – are signature features of Bangkok’s burgeoning skyline.  There are many such wats, or Buddhist temple complexes, all over the city, with about 30,000 throughout Thailand.  The main buildings of the wat include:  chedis, which house relics of Buddha such as a hair or bone; pillared and spired mondops, which hold sacred texts; and wihans or bots, halls and temples often housing golden Buddhas.

There are also impressive temple ruins in historic Ayutthaya, a 15th century center of power and culture, just an hour or so outside of Bangkok.

THAILAND’S ELEPHANTS:  Once the ‘4-Wheel Drive’ for the Royal Family

You see them seemingly everywhere in Thailand – in the heart of Bangkok, within the forested rubber trees of Krabi Provence and at amusement parks around the country.  To Thailand, elephants are what horses are to the Western World.

“The elephant used to be a ‘4-wheel drive’ for the Royal Family,” says my tour guide.  “They were also used in battle.  So elephant are our symbol in Thailand – trunk up or trunk down.”

At the so-called Elephantstay camp in Ayutthaya, I dodge the waterspray of 8-year old Noppakhao, the camp’s young and mischievous elephant, as he attempts to squirt visitors around him.

Noppakhao along with several others are frolicking in a nearby river.  “The soaking in the river is really important to cool them down.  The wrinkles in their skins retain more water and helps cool them down,” says a camp elephant handler.  As we walk back to camp, another elephant sighs with a rumbling growl – thundering like a souped-up engine.

Elephantstay, a non-profit organization, is a working elephant village housing retired elephants.  The program involves living with, caring for and learning about elephants, offering visitors a chance to ride and feed them, and to develop a personal relationship with an elephant.  “Elephants actually helped build Thailand into what it is today.  The history and the culture of the elephant is very important and is what makes Thailand unique – especially for visitors,” says the handler.  “Because what they see is a relationship that they don’t get to see in their own country.”

Today, elephants play a leading role in Thailand’s tourism industry, offering rides and a learning experience for tourists.  “Elephants have always been with people,” says the handler.  “And it’s not a concept that Westerners understand because generally all information for them has been about African elephants.”