My half-day excursion to Buck Island, off the northeastern shore of St. Croix, took place on a Monday morning. I didn’t even realize how lucky I was until I spoke with Captain John Kelly with Big Beard’s Adventure Tours.   “What I mostly like is the difference between yesterday and today,” he tells me. “On Sunday, everybody’s off and the beach was full. We made two trips and there were maybe 300 people.”

“Today, on a Monday morning, there’s nobody,” he continues. “You’re going to see tracks from turtles on the beach – it‘s absolutely outstanding. Today you’re going to have it completely to yourself. Yesterday, it was a big social party with 300 strangers. Today, it’s just you and nature.”

Captain John’s words rang true. During my hour or so on the island’s pristine West Beach, I walked along the sand and snorkeled in the calm, clear water. West Beach has often been voted one of the best beaches in the world. 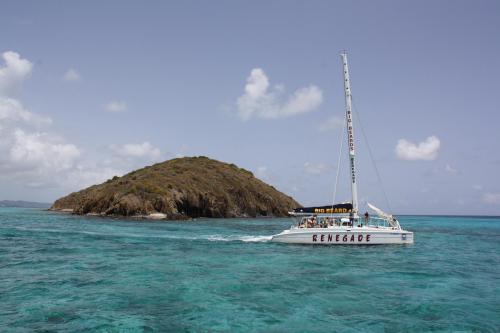 We next anchored offshore in choppier waters on the other side of the island for more snorkeling.   While I’m not the most experienced snorkeler, I did manage to gaze upon giant brain coral with their wavy patterns, and see lots of marine life including black damselfish and easy to spot parrot fish. Someone said they saw a barracuda, but I didn’t.

“Parrot fish range in colors and there are the “stoplight” parrot fish,” explains first mate Gabriel Dichiro. “Males are very flamboyant, kind of a teal with reds and yellows, while females are more plainly colored, similar to birds in that sense, grayish and red. And that’s where they get the name stoplight parrot fish.” 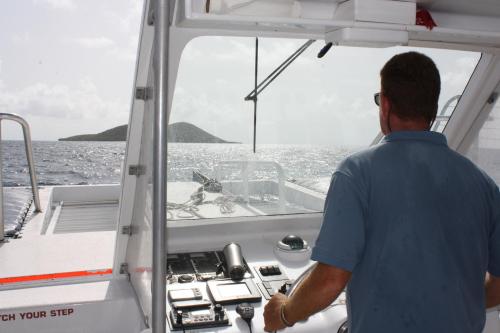 Buck Island Reef National Monument is 880 acres including Buck Island’s 176-acre land mass and 704 acres of sea area with its coral reef systems. The highlight for me was sparkling and peaceful West Beach – with no one else but our small group.   As I look back on this adventure, I recall Captain John’s words: “I apologize that you have the beach completely to yourselves.”