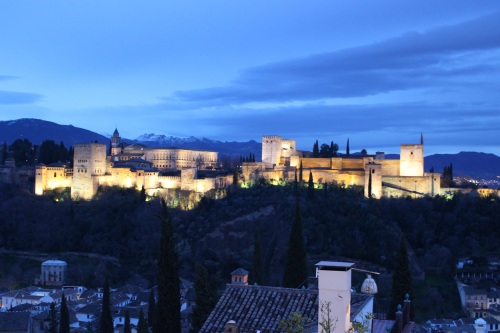 Alhambra at nightfall as seen from the Nirador de San Nicolas. Photo by Richard Varr

There’s no better view of Granada’s imposing Alhambra – the fortified hilltop Moorish castle fronting the dramatic snow-capped peaks of Spain’s Sierra Nevada – than from the hilltop lookout known as Mirador de San Nicolás. The best views are at dusk, when the waning sunlight casts a golden glow on the 14th century palace, the last Moorish holdout in Europe.  And as the sun sets, the spotlights illuminate the palace walls. I enjoyed the view with a beer in one of the several restaurants and cafes lining the adjacent street, all with clear views of the Alhambra and across the valley. On the way up to Mirador de San Nicolás, you’ll walk up the central streets of the Albayzín Moorish Quarter with its Moroccan cafes and shops lining the hillside’s narrow streets.

Alhambra’s Courtyard of the Myrtles. Photo by Richard Varr

Islamic calligraphy in the Alhambra. Photo by Richard Varr

Granada was the last Moorish stronghold which fell to the Catholic Kings, Ferdinand and Isabella in 1492. Alhambra’s stone walls shelter several structures including a museum, a fort with ruins and dominant tower, and the elegant Moorish Royal Palace with its courtyards, pools and seemingly starlit domed ceilings, where it’s likely that Columbus pitched his voyage to the Orient by traveling west, but instead ended up discovering the New World. 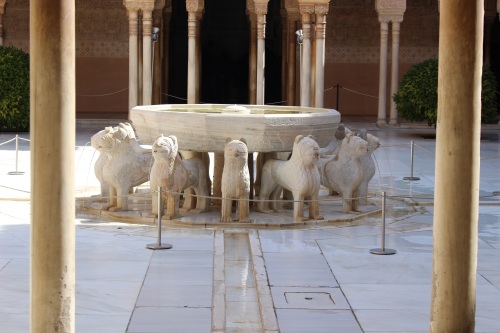 Courtyard of the Lions with the circular lions fountain in the Alhambra. Photo by Richard Varr 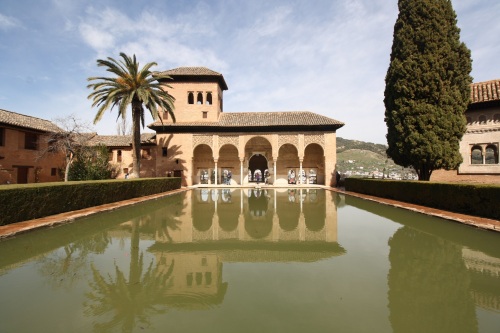 Part of Palicio Nazaries in the Alhambra. Photo by Richard Varr

I would recommend spending at least a half day or more touring and walking the Alhambra’s grounds. Timed entry tickets that should be reserved a few months in advance are required to get into the Royal Palace; or, you can take a guided tour usually the day you arrive. I would also recommend purchasing the Granada Card for access into the Alhambra and other sights around the city. http://en.granadatur.com/page/5-que-incluye-la-granada-card-bono-turistico/ 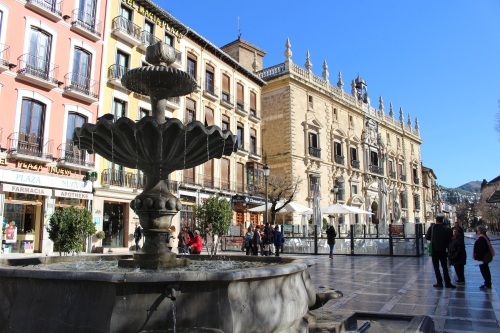 View from the Alhambra. Photo by Richard Varr

What I liked most about Granada was in the town center – the Royal Chapel of Granada with its Isabelline Gothic-style architecture. This extension of the Cathedral holds the tombs of the Catholic Kings who brought Spain together after defeating the Moors. Grandiose marble tombs are the nave’s centerpieces, while a small stairwell leads to the actual underground crypt with a window to see their coffins inside. The chapel’s alter glitters with golden trim and features statues of the monarchs and Old Masters’ paintings, while Isabella’s crown and Ferdinand’s sword can be seen in glass display cases. The Cathedral, meanwhile, is vastly cavernous with Renaissance design and with Baroque-style side chapels. Unfortunately, taking photos inside the Royal Chapel is prohibited so none are posted here.