You can almost feel Salvador Dalí’s presence in his museum in the Catalonian town of Figueres, just under a two hour train ride from Barcelona.  Many of this eccentric artist’s likenesses – with his pencil-thin moustache – can be seen in his 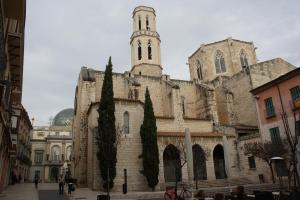 Church Square with the Museum behind the church. Photo by Richard Varr

own artworks within this old theater-turned museum, also the final resting place of one of the 20th century’s most innovative artists. With its signature cupola skylight, the museum sits behind Figueres’ stone-walled Church of Sant Pere with its impressive tower.  Upon entering the museum, visitors soon 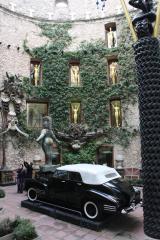 find themselves in a courtyard with slim gold-tinted figurines up three and four stories within window ledges.  In the center is the “Rainy Taxi” – an artwork, if you can call it that (Dalí can, of course).  Put a euro in the slot and, yes, it rains inside the taxi upon a mannequin driver and plants.  Click on the video link below to see this.

The futuristic skylight tops the museum’s expansive main atrium with a few large murals of Dalí’s surrealistic and even macabre artworks featuring contorted shapes and figures, cool and dreamlike colors, and paintings of his wife Gala.  Stairwells lead to backrooms with his paintings, engravings, sculptures, drawings, photography, a collection of gold jewels set with gems, and a lot more. 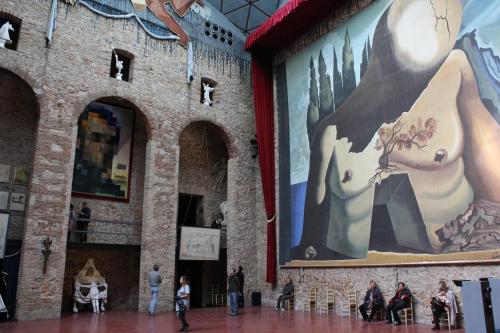 Inside the Dali Museum. Photo by Richard Varr with permission from the Fundació Gala-Salvador Dalí.

How does one understand Dali’s genius?  A quote from the artist taken from the museum’s website is a good start:

“It’s obvious that other worlds exist, that’s certain; but, as I’ve already said on many other occasions, these other worlds are inside ours, they reside in the earth and precisely at the centre of the dome of the Dalí Museum, which contains the new, unsuspected and hallucinatory world of Surrealism.”

Face of Mae West Which Can Be Used as an Apartment. Photo by Richard Varr with permission from the Fundació Gala-Salvador Dalí.

Exhibit rooms are numbered, but the museum’s floor plan guide suggests seeing the artworks in any order you’d like in keeping with the way Dalí would most likely prefer.  The brochure, however, also suggests that rooms can be visited in numerical order so you don’t miss anything.  I did just that.

In all, the collection encompasses maybe 1,500 of Dali’s artworks.  A few you simply can’t (and shouldn’t) miss include: 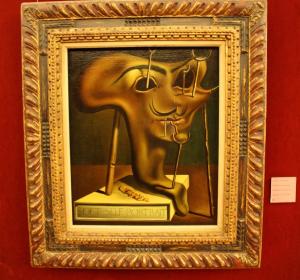 Soft Self Portrait with Grilled Bacon. Photo by Richard Varr with permission from the Fundació Gala-Salvador Dalí.

–          Gala Nude Looking at the Sea Which at 18 Meters Appears President Lincoln.  This artwork is in the main atrium.

–          Face of Mae West Which Can Be Used as an Apartment.  Climb a stairwell, look through a large magnification glass and see the likeness of the 20th century actress and sex symbol.

–          Portrait of Gala with Two Lamb Chops Balanced on her Shoulder.  (Ditto in reference to the previous listing.) 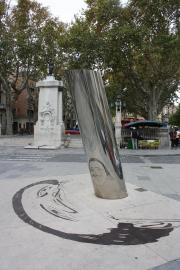 A bit of background:  the museum is housed in the building of the former Figueres Municipal Theater, which was partially destroyed in 1939 at the end of the Spanish Civil War.  Dalí was approached by the mayor to turn the ruins of the old theater into a new museum for his artworks.

The following in Dalí’s own words, as quoted by the museum’s website, explains his thinking on this: 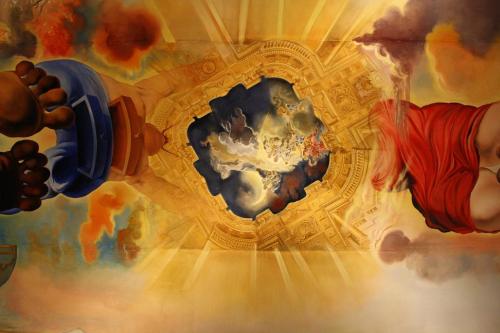 Detail of the Palace of the Wind Ceiling. Photo by Richard Varr, with permission from the Fundació Gala-Salvador Dalí.

“Where, if not in my own town, should the most extravagant and solid of my work endure, where if not here? The Municipal Theatre, or what remained of it, struck me as very appropriate, and for three reasons: first, because I am an eminently theatrical painter; second, because the theatre stands right opposite the church where I was baptised; and third, because it was precisely in the hall of the vestibule of the theatre where I gave my first exhibition of painting.”

Born in Figueres in 1904, Dali also died in his hometown in 1989.  He is buried in the museum’s crypt, which is located in the center of the museum.