We behold more of Asia’s dramatic scenery both above and below ground in Southwest China.  It’s where karst mountains – steep, weathered limestone formations – shoot straight up from the ground like crooked teeth, some with pointed peaks and others at 90 degree angles with flat mountaintops.  My trip to Guangxi Province included stops in Guilin, a bustling tourist destination along the Li River, surrounded with the beauty of these karst formations.

Cormorants were once used for fishing. In front of Elephant Trunk Hill. Photo by Richard Varr

The town’s signature twin pagoda’s along the Rong and Shan Lakes help frame Guilin’s scenic urban setting, especially at night as the waterside towers and trees are bathed in bright orange and brilliant green hues from powerful spotlights.  But the real draw is the area’s natural beauty.  Sights to see include the city’s most famous rock formation, the 100-meter-high Elephant Trunk Hill with a cavernous hole along one end resembling, with a bit of imagination, an elephant’s trunk dipping into the Li River.

Karst mountains formed when the softer layers of the limestone plains were eroded by rainwater over the millennia, leaving harder limestone formations intact.  Erosion also carved sinkholes and caves, including Guilin’s Reed Flute Cave, one of the most spectacular and spacious subterranean vistas I’ve ever seen.  It’s where 30-foot-high passageways snake within Guangming Hill.  Illuminated with colored lights, I walk along dramatic underground panoramas of dangling stalactites melding with stalagmites, spurring on a spelunker’s imagination with shapes resembling rock gardens, rock palaces, contorted faces, creatures and more.

The next day, we hop on a riverboat for an afternoon cruise along the Li River, from Guilin to Yangshuo, another scenic waterside town.  We pass karst formations along the way including so-called Bat Hill, a formation resembling bat wings; the Painted Hills of Nine Horses, and a rock formation resembling a woman carrying a baby – figures, no doubt, maybe discerned with a bit of imagination.  One rock looks like a dragon’s head, and we see a large opening in the base of one mountain.  “This cave is one of the biggest in Guilin, and we call it Crown Cave because on the top is a rock shaped like a crown which the emperor would wear in ancient times,” says tour guide Lisa Bai. 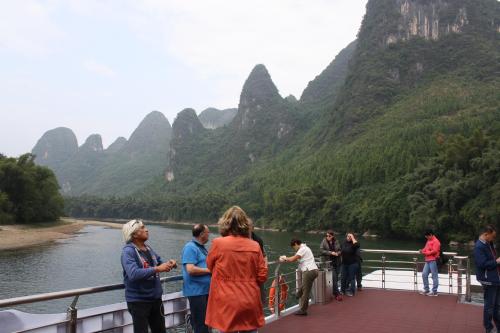 Our cruise is taking place in October, the time of year when the water level is waning and thus tranquil.  On this day, the sun at times peeks through hazy cloud cover.  While blue skies might set a clearer backdrop for photos, I learn the locals actually prefer seeing the mountains shrouded in haze.  “In China, people like legendary stories and with mist we think it’s so mysterious,” Lisa tells me.  “Like there are fairies and gods staying there reminding us of imaginary stories, and that’s why we prefer to look at the view with a misty background.”

VIDEO:  Short clip while on the cruise boat.

From Yangshuo, we drive north along the Mao Ming Highway for a couple of hours to the mountain village of Ping An and the surrounding Longji rice terraces.  They’re called terraces because the farm land is actually layered along sloping mountainsides where golden rice stalks sway in the wind before the fall harvest.  We hike more than 1,000 steps to the top of the mountain for the dramatic views below.

Mountain Town of Ping An. Photo by Richard Varr

VIDEO:  Tour guide Lisa Bai explains why one hillside with rice terraces is called “Seven Stars with the Moon.”

Lisa led our writers’ group.  She is an excellent tour guide and I would recommend hiring her when visiting the area.  You would be fortunate to have her assigned to your tour!  Email: 443891070@qq.com