Greater Rotorua is an astounding dichotomy.  The natural beauty of rolling hills and aquamarine lakes contrasts to its volcanic activity with boiling mud pits, hissing fumaroles, yellow-streaked sulfur mounds and spitting, gurgling geysers.  And there’s no mistaking the sulfurous smells wafting through the air. Nonetheless, the area’s geothermal characteristics make it indeed a one-of-a-kind attraction.

I visited the Wai-o-tapu Thermal Wonderland with its craters filled with chalky-green waters, sulfur residues and crude oil slicks; its trickling waterfalls; and the bubbling and steaming Champagne Pool, named so because of its orange-tinted mineral deposits lining the pool’s perimeter.

Nearby Wai-o-tapu is the small Lady Knox Geyser which spouts daily just after 10 AM.

The Whakarewarewa Thermal Area includes the large Phohutu Geyser, shooting steaming water as high as 100 feet and erupting on average of 10 to 25 times a day.  “There are so many things I see in a geyser.  There’s a power, a strength and the ability that has to change,” explains Whakarewarewa guide Shane Marshall.  “When I look to the base of the geyser, there’s all that strength you can see from the actual base.  When it first comes out of the ground, there’s intense strength pushing the water out.” 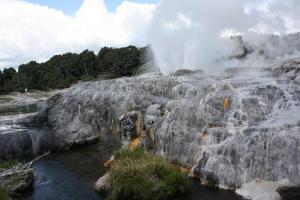 “We as a people, we pull all of our strength from the environment around us,” Marshall continues.  “So what that tells me is anytime I need strength I just need to look to the environment to remind me of it.  As the water comes up it changes, so again that offers me the ability to look and see change, going from intensely hot to cold.” 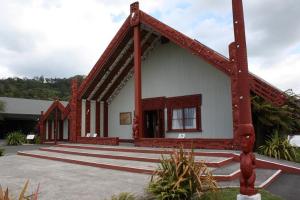 Whakarewarewa also has the Ngā Mōkai-a-Koko Mud Pool, formed by volcanic acid gases and steam decomposing minerals to form clay called Kaolin.  Nearby is the Thermal Village with its indigenous people’s Māori meeting house and village; and Te Puia with the Māori Arts and Crafts Institute and its own village as well, offering live cultural performances, carvings and weavings.  “The village and meeting house give people the opportunity to come and see who we are and to see our living  and ceremonial areas, without actually intruding on us as a people,” notes Marshall.

The “Devil’s Bath,” a crater with water colored by ferrous salts and sulfur. Photo by Richard Varr

Other natural wonders and attractions include the expansive Lake Rotorua, popular for water sports, fishing and boating; the Buried Village encompassing what remains of a village after the 1886 Mount Tarawera volcanic eruption; and the Polynesian Spa, with thermal pools fed by underground springs.

Nearby Wai-o-tapu is the small Lady Knox Geyser which spouts daily just after 10 AM.