It’s been 14 years since my last visit to the U.S. Virgin Islands, and during my July visit, I again found the USVI to be a wonderful destination. I stayed on St. Thomas, took a day trip by ferry to St. John and flew in a seaplane to St. Croix. From St. Croix I embarked on a morning excursion to Buck Island, which has one of the most pristine beaches I have ever encountered anywhere – and I’ve seen a lot of beaches. Of all the Caribbean islands I have visited (maybe two thirds or three fourths of them at this point), I found the USVI to have a true Caribbean feel with its food, history and heritage, but at the same time I must admit, to be so comfortably American. 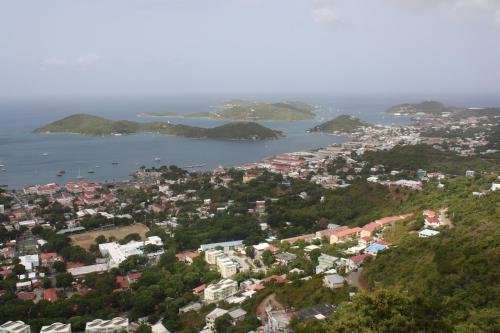 During my trip, I participated in some great excursions and activities that I would recommend. 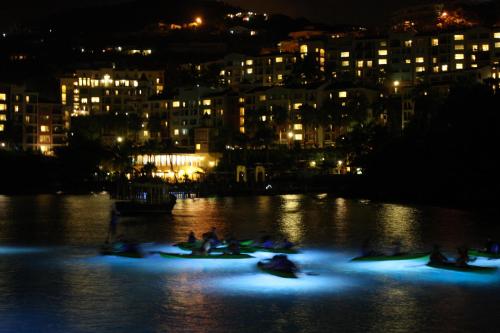 What do fish do at night? Well, swim – what else. But you can see them at night while kayaking in a clear-bottom vessel ghostly illuminated with LED lights. The tour operator is Night Kayak at the foot of Frenchman’s Reef in Charlotte Amalie, just below the colossal Marriott resort with the same name.

“To be out on the water, to have everything glowing all around you and the kayaks are clear so you can see the fish below you,” says Mark McKellar with Night Kayak/Adventure Center. “The stingrays and tarpon are more active at night as they’re nocturnal.”

The lights create a five foot halo around each kayak, with tours lasting an hour and a half. Along the way, green turtles cling around so-called turtle grass, you’ll hear frogs, see a fruit bat or two and even have a ballyhoo fish jump out of the water into your kayak. “If a fish jumps into your kayak, don’t jump out of it,” jokes McKellar.

The trip brings kayakers to what’s called Pirates Point. “There’s a lot of Danish folklore about how the Danish used to stop the pirates at that point,” says McKellar. “Also, a private homeowner has built a pirate ship to resemble the Black Pearl, and he has lights underneath that pirate ship.”

“To be able to see the fish right below you in a clear bottom kayak is the thrill,” he adds. “The LED lights illuminating everything around you really provide a surreal experience.”

‘Freezing’ in the Caribbean?

I never thought I could actually get cold and shiver on St. Thomas, until I stepped inside the Magic Ice Bar. There are a handful such ice bars around the world, like the one I once visited in Stockholm. Located along Charlotte Amalie’s bustling waterfront, the Magic Ice Bar is the only one in the Caribbean.

Walking into this giant freezer of sorts was a wonderful experience. The first several minutes are welcomed relief from the Caribbean heat. They give you an overcoat of sorts that protects you from the 23 degree (F) cold, and even offer you leg warmers, gloves and hats. Gloves are a must so your fingers don’t melt the ice.

Inside are solid ice sculptures bathed in shifting colored lights – no dripping, as one might suspect in the Caribbean. Many have aquatic themes – a seahorse, octopus, sharks, turtles, crabs, lobsters, fish and even a mermaid. Other sculptures include Bob Marley, the king and queen of Denmark (the USVI was formerly Danish), iguanas, a walk in “chapel” and a giant bottle of Cruzan rum. There are pirates, including ice figures of Blackbeard and Captain Hook. “It’s a pirate bar,” says bartender James Samuel who’s probably the coldest man in the Caribbean. And yes, there’s an actual frozen bar serving rum spirits.

Before entering the Ice Bar, I shook James’ hand and found it to be cold. “I love it because it’s very different,” he tells me. “It’s very hot outside, but cold inside here.”

“So, how do you stand it, working in the frigid Ice Bar all day long?” I ask him. “I have on six shirts, three pants and four pairs of socks,” he admits. “And two hats.” 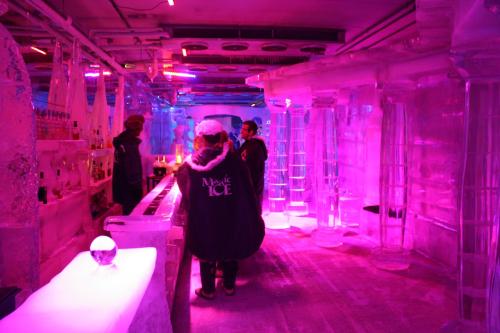 At the ice bar. Photo by Richard Varr

St. John seems to be the jewel of the USVI – mountainous and scenic with wonderful coves and white sand beaches. I went there on a day trip from St. Thomas by ferry, with the ferry landing in the small and walkable town of Cruz Bay with its modern shopping villages. More than half of the island is national park land, with the remainder as small towns, homes, store clusters and private lands. I found the island to have more of a resort feel as many living on the island are originally from somewhere else.

My tour included visits to the ruins of two former plantations – the Annaberg Sugar Mill, with its old windmill and factory buildings; and the Cinnamon Bay Factory Ruins, with its stone smokestack and the stone shell of its sugar factories. “This is where they boiled the sugar cane, made molasses and stored it before shipping,” says Kenneth, my tour guide and taxi driver.

From the high roads along the edges of hilly terrain, we could see the north shore’s many fine beaches along Maho Bay, Cinnamon Bay, Trunk Bay and Hawksnest Bay. “Maho Bay is the favorite nesting area for sea turtles.” Kenneth tells me. The highlight of my St. John trip, however, was snorkeling along Trunk Bay’s 225 yard underwater snorkeling trail. The beach at Trunk Bay has snorkel rentals, a snack bar and bath house. Although it can get crowded, it will be a must stop on my next visit.

St. Croix’s Forts: A Historic Glimpse of the Past

Croix is the largest of the USVI islands and home to two well preserved and intriguing forts. Just steps from one end of Christiansted’s popular Boardwalk is Fort Christiansvaern and its surrounding structures, their yellow brick facades brightly illuminated by the strong Caribbean Sun. Now within a National Park, 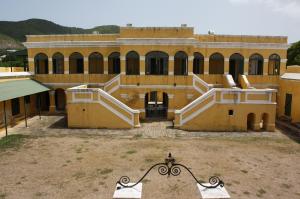 Fort Christiansvaern was completed in 1749; its sturdy walls once defended the early Danish settlement from pirates and intruders – its cannons still pointing out to sea. Nearby, emblazoned with the same banana yellow façade, is the 1841 Customs House with its impressive stairwell. The white-towered Steeple Building was St. Croix’s first Lutheran church and is where I saw a local art exhibition. 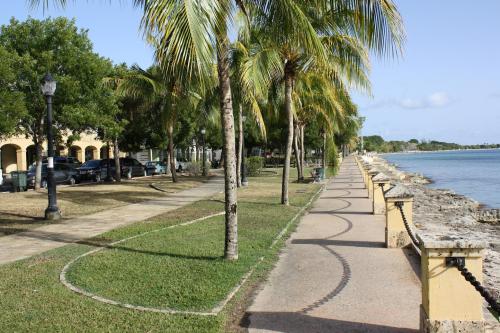 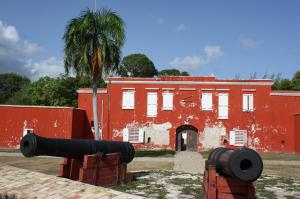 On the island’s west end, Frederiksted’s treed waterfront promenade leads up to the red-walled Fort Frederik. The fort once protected the town, but now welcomes cruise ship passengers as it sits just opposite the cruise ship berth. Inside the fort is a museum highlighting the 1848 slave revolt that took place right outside the fort – an event that eventually led to emancipation. I was most impressed with a cracked 1778 bell that once rang on the nearby Estate LaGrange.

“It was the bell that was used on the plantation – each had a bell to call the men and women to work,” explains Frandelle Gerard, Executive Director of Crucian Heritage and Nature Tourism, Inc. “It was used if there was a fire; to announce the end of the work day. And when we had our slave revolt, all of the bells on all of the plantations rang as a warning and as a sign to the enslaved people that it was time to mobilize and move into Frederiksted. 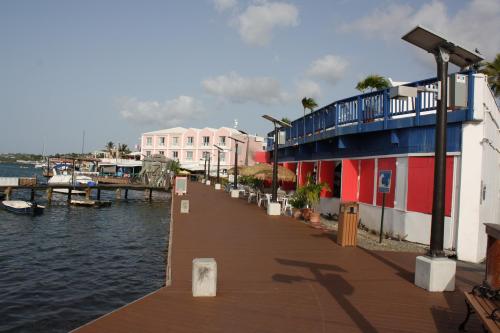 My half-day excursion to Buck Island, off the northeastern shore of St. Croix, took place on a Monday morning. I didn’t even realize how lucky I was until I spoke with Captain John Kelly with Big Beard’s Adventure Tours.   “What I mostly like is the difference between yesterday and today,” he tells me. “On Sunday, everybody’s off and the beach was full. We made two trips and there were maybe 300 people.”

“Today, on a Monday morning, there’s nobody,” he continues. “You’re going to see tracks from turtles on the beach – it‘s absolutely outstanding. Today you’re going to have it completely to yourself. Yesterday, it was a big social party with 300 strangers. Today, it’s just you and nature.”

Captain John’s words rang true. During my hour or so on the island’s pristine West Beach, I walked along the sand and snorkeled in the calm, clear water. West Beach has often been voted one of the best beaches in the world.

We next anchored offshore in choppier waters on the other side of the island for more snorkeling.   While I’m not the most experienced snorkeler, I did manage to gaze upon giant brain coral with their wavy patterns, and see lots of marine life including black damselfish and easy to spot parrot fish. Someone said they saw a barracuda, but I didn’t.

“Parrot fish range in colors and there are the “stoplight” parrot fish,” explains first mate Gabriel Dichiro. “Males are very flamboyant, kind of a teal with reds and yellows, while females are more plainly colored, similar to birds in that sense, grayish and red. And that’s where they get the name stoplight parrot fish.”

Buck Island Reef National Monument is 880 acres including Buck Island’s 176-acre land mass and 704 acres of sea area with its coral reef systems. The highlight for me was sparkling and peaceful West Beach – with no one else but our small group.   As I look back on this adventure, I recall Captain John’s words: “I apologize that you have the beach completely to yourselves.”